Exploring the Ruins at León Viejo in Nicaragua

﻿Located approximately 37 miles north of Managua in Nicaragua is León Viejo, one of the first Spanish settlements in the New World. Although its ruins consist of mostly the three-foot-high walls of its original structures, it provides a unique example of its original layout and a glimpse into its storied past. In fact, few 16th-century cities are preserved intact and unaltered by subsequent rebuilding and this one of the reasons it was designated a World Heritage Site in 2000. 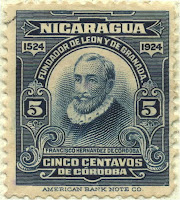 Founded in 1524 by Francisco Hernández de Córdoba, he was sent from Panamá by Pedrarias Dávila to conquer the Pacific zone northwards toward what is now El Viejo. The city quickly became one of the most important in the region with gold and silver from Nicaragua and valuables from other countries traded frequently by its merchants. But unfortunately, for Córdoba, he did not enjoy his thriving capital for long because he was executed on the orders of Pedrarias for treason in 1526.
The city reached its peak of development around 1545, under the leadership of Governor Rodrigo de Contreras. According to UNESCO, it was still relatively small and its Spanish population never exceeded 200. But after an eruption by the looming Momotombo Volcano in 1578, (combined with the raging inflation to drive the richer inhabitants away), much of the population had moved away. By 1603, there were only 10 houses left with the remaining ones abandoned and allowed to fall into ruins. Its final demise occurred in January 1610, when a massive earthquake destroyed most of the city. As a result, the population relocated approximately 20 miles west and established what is now known as the city of León. The older city was gradually buried by the continuous explosions of volcanic ash and it remained hidden until it was rediscovered in 1967.

Getting to León Viejo

Visitors to León Viejo can get there by taking the bus to the town of La Paz Centro, located between Managua and León. From there, a local bus departs for the site. But keep in mind that the last bus from La Paz to León departs at 2 p.m., so it is best to come as early as possible if you are based in León. For visitors with their own car, the site can be reached by turning right at a well-marked sign just before the town of La Paz Centro. After that, it is approximately a 20-minute drive to the site. The site is open daily from 7 a.m. to 6 p.m. and admission is C$12 for Nicaraguan residents and US$2 for foreigners. The US$2 fee even includes a guided tour.

Despite its role as a thriving capital, the León Viejo was never more than a collection of rustic buildings, most of them built with the same material as those used by the area’s indigenous people: wood, bamboo, and mud. Only the church, convents, and houses of the governor as well as other richer citizens were stronger and more elaborate.
﻿
The site itself covers an approximate area of 2,600-feet-by-1,600-feet and among the ruins excavated since the site’s rediscovery in 1967 are the Plaza Mayor, the cathedral (with a central nave and main altar at the eastern end), and the La Merced Convent, which includes five rooms enclosed by a wall that directly connects the building with the convent church. The La Merced church is noted as the site where the headless remains of Francisco Hernández de Córdoba were discovered next to his executioner Pedraris Dávila. In November 2000, the graves of Nicaragua’s first three bishops were also uncovered there and their remains are now interred in large coffins carved by the well-known Nicaraguan sculptor, Federico Matus.

Located just east of the main ruins are the remains of an old fort, which was built during the beginning of the settlement. It subsequently fell into ruins within two decades, which was an example of the area’s overall peacefulness. One of the largest buildings in the city was the Royal Foundry and Mint, which consists of 11 rooms and several private houses. But it too fell into decline after a series of devastating fires destroyed the structure, which was only built with indigenous materials. 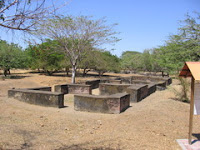 The remaining structures include the foundations of several houses and visitors can explore the site with or without a guide. The history of the former city is also provided by many informative signs located throughout the site. For those who enjoy exploring historic sites, León Viejo offers plenty to see within a several-hour visit.
Tours of León Viejo

Oro Travel - This tour company, based in Granada, offers a daily combine León and León Viejo tour that begins with a visit to the ruins. The tour continues on toward modern-day León with a stop at the cathedral followed by a pleasant walk through the colonial streets and a lunch at a typical Nica restaurant. The tour includes roundtrip transportation, entrance fees, and a bilingual guide. More information can be found at their website: www.orotravel.com.

Nicatime Tours - Based in León, this company offers a León Viejo and Assosoca tour that begins with a tour of the ruins followed by a short hike to the Laguna Asososca, a volcano crater lake where guests on the tour can go for a swim and have a picnic lunch. The tour includes roundtrip transportation, entrance fees and a guide as well as food and drinks. More information can be found at their website: www.nicatimetours.com.

Va Pues Tours - Based in León, this tour company provides a four-hour León Viejo and Lake Xolotlán tour that includes roundtrip transportation, a bilingual guide, entrance fees, and a complimentary drink. The tours depart twice a day at 8:30 a.m. and at 2 p.m. More information can be found at their website: www.vapues.com.

Bigfoot Nicaragua - This popular tour company, based in León, offers a León's Three Greatest Attractions tour that includes a visit to the Cerro Negro Volcano, Laguna Asososca, and León Viejo all in one day. The tours depart at 6 a.m. and return at approximately 6 p.m. and includes 4x4 roundtrip transportation with professional driver, a bilingual guide, breakfast, lunch, snacks, and water as well as all safety equipment and entrances fees. More information can be found at their website: www.bigfootnicaragua.com.
Posted by Sir Runner James