Located on the southern shores of the Río San Juan, approximately 45 miles from the city of San Carlos, is a historic fortress reminiscent of a Mayan temple. Known as El Castillo de la Concepción or El Castillo de la Inmaculada Concepción, it was built by the Spanish in 1675 as one of several forts to deter pirates from entering the river from the Caribbean Sea en route to the wealthy city of Granada. Due to its relatively navigable waters, the Río San Juan offered an easy trade route between Granada and the rest of the world. Unfortunately, it also provided pirates with easy access as well as escape routes. After Granada was pillaged and burned several times by pirates, the Spanish royalty ordered that this formidable-looking structure be built at one of the river’s narrowest bends.

And formidable it was. According to Nidia Herrera Obregon, the director of the site, “It had dozens of cannons facing all directions with four bastions as well as a fully stocked armory of more than 10,000 weapons. Even the British Navy tried several times to seize control of it in hopes of dominating the trade route.” After a botched attempt in 1762, the British tried again in 1779 under the command of Captain Horatio Nelson. As strange as it sounds, they actually succeeded by attacking from the jungle side of the fortress instead of the river. Once Nelson departed after the triumph, the fort eventually succumbed to disease and it was completely abandoned by the survivors in a mass desertion.
Today, the fort is one of the most important historical attractions in the region. As stated by Obregon, “In 1993, the castillo became a museum attraction and it includes a number of panels where visitors can read and learn about the history of the site as well as its variety of objects.” Its location on top of a hill provides excellent views of the surroundings and its overall appearance remains relatively the same as it was more than two centuries ago. It stands as a quiet reminder of how important this river was to the Spanish colonials and the British Navy.

From Managua, there are three modes of transportation: 1) a short and fairly expensive flight on La Costeña Airlines  (www.lacostena.com.ni) that lands on a dirt runway in the port city of San Carlos; 2) a 15-hour ferry ride from Granada: and 3) a nine-hour relatively direct bus ride. After arriving in San Carlos, it is important to remember that there is no road access to the fortress. So the only way to reach it is by the boats that depart from San Carlos near the mouth of the Río San Juan. The travel is provided by small speedboats, known as pangas, and the trip takes approximately two hours. Most visitors choose to hire a panga with a guide or simply book a tour from a reputable tour company. Further information about tours by two reputable companies are provided below.
Exploring El Castillo de la Concepción

Once at the fortress, it takes approximately two hours to fully explore. While touring the site, most visitors also enjoy the excellent views of the surroundings, which include the rapids to the east. According to tour promoter José Miguel Sandoval, “the museum is special to both domestic and foreign visitors and that it takes good care of the historical objects, educational tools, and property. The success of the site also helps to create jobs for our local citizens.”
The layout of the fortress is approximately 161 feet in length and 66 feet in width with four corner bastions known as Santa Barbara, Santa Rosa, Santa Teresa, and Santa Ana. Its interior consists of three barracks, a chapel for officers as well as enlisted soldiers, a hospital, a prison, and a number of storage areas and workshops. The site is fairly easy to get around (except for the slippery moss) and there are only portions where the steps are fairly narrow and steep. For those wishing to climb to the higher levels, the addition of metal walkways provides easy access. 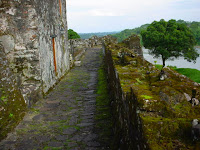 To add to the overall historical appearance, the dark stone walls are covered with moss and the appropriate placement of artifacts such as cannons and cannonballs with smaller details such as rum bottles offers visitors a glimpse into life within its walls. In addition, the views from the four bastions provide four different perspectives where watchful troops once stood guard.
Tours of El Castillo de la Concepción

For those visitors who prefer a more structured and guided tour of the site, Servitours is a reputable tour company that offers trips to the fort. Most importantly, they also include roundtrip transportation, which removes the issue of finding a guide and a panga in San Carlos. The three-day, two-night Río San Juan-El Castillo tour includes all land and water transportation, a roundtrip flight from Managua to San Carlos, two night's accommodations, all meals and beverages, a bilingual guide, and admission fees. More information about Servitours and be found at their website: Servitours.
Posted by Sir Runner James