Exploring the Masaya Volcano in Nicaragua

The steaming Masaya Volcano, also known as the Volcán Masaya, is one of the first noticeable landmarks when landing at the Augusto Sandino International Airport in Managua, Nicaragua. Located approximately 14 miles southeast of the city, it is one of the country's most active volcanoes. According to the Global Volcanism Program at the Smithsonian Institution, the Masaya lies within the massive Pleistocene Las Sierras shield volcano that includes steep-sided walls as high as 984 feet. The northwestern end of the caldera is filled with more than a dozen vents that continually erupt along a circular, 2.5-mile system. The twin volcanoes of Nindirí and Masaya, the primary source of all of the historical eruptions, were constructed at the southern end of this system and contains several summit craters, including the currently active Santiago crater.

Although it is not the usual cone-shaped volcano, it is one of the easiest active volcanoes to visit without risking your life. It includes everything for a good introduction to volcano exploration: a smoking crater, a variety of trails filled with local wildlife, no necessary climbing experience, and a mysterious past enhanced by true stories of human sacrifice as well as other interesting local legends.

The Masaya Volcano is located within the 21-square-mile Parque Nacional Volcán Masaya, just off the Carretera a Masaya at Km. 6, approximately four miles north of Masaya. The national park, established in 1979, actually includes five different craters: the active Santiago, and the dormant  Masaya, San Fernando, Nindirí, and San Pedro. The park is open every day from 9 a.m. to 4:45 p.m. 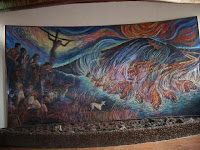 Visitor Center: The visitor center provides a great introduction to the park as well as a thorough history that covers many of the local legends. It is also the best place to get a good trail map and inquire about hiring a guide for tours of the bat caves and lava tunnels. Make sure to view the dramatic mural before heading up the hill toward the main crater because it really helps depict the fascinating  history that once frightened both the local indigenous tribes as well as the Spaniards who called it "The Gates of Hell." In addition to the human sacrifices that occurred there, a Franciscan friar once attempted an exorcism to help quiet the volcano. The large Bobadilla Cross, located on the eastern rim, was named after the friar who put it there, and a precarious set of stairs lead to the cross.

Santiago Crater: The paved road from the visitor center leads directly to the parking lot at the rim of the Santiago crater. From there, you will see its sulfur-dioxide gases billowing up toward the sky and the Bobadilla cross and its series of stairs on the right-hand side. However, due to the wind direction that generally blows the dangerous gases toward the stairs, they are often closed to the public. In the parking lot, there are signs that advise visitors to park their cars facing the exit. This  suggestion of a quick escape reminds all visitors about the looming danger that should not be taken lightly. Besides, it was only in 2001, when the crater exploded with enough force to send large boulders up into the parking lot where it damaged several cars. 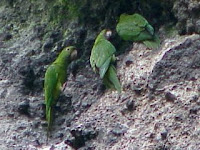 Sendero los Coyotes - Also known as the Coyote Trail, it offers a 3.5-mile hike with views of moon-like landscapes, lava beds, craters, Lake Masaya, a variety of wildlife that includes coyotes, and a fascinating species of birds known as chocoyos that thrive in the cliffs around the smoking crater despite the toxic gases. It is a spectacular hike that just about  sums up what Nicaragua’s landscape is all about.

Night Tours of the Masaya Volcano 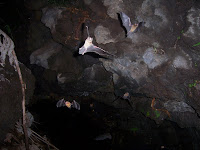 Since 2007, the park has offered night tours of the volcano, which is one of the best ways to see it. The three-hour tour begins with meeting the guide in the parking lot at the Santiago Crater for a short explanation of the tour itinerary followed by a drive to the base of the Crater San Fernando. After a climb to the summit to watch the sunset, hikers descend and enter the caves that are home to thousands of bats. Good hiking boots are recommended especially since the cave floor is almost entirely covered with bat guano. However, each person receives a hard hat and a flashlight to help you manuever around the cave and prevent droppings from above. Afterward, the tour regroups at the ranger station where each person trades in their hard hat and flashlight for a gas mask, which is used while exploring the lava tunnels at the southern end of the Santiago Crater. The amount of molten lava  can vary by the time of year, so be prepared to be either excited or disappointed. But either way, the mere fact that you are wearing gas masks can make this final portion of the tour feel dangerous and exciting. The tours are offered every day at 5 p.m. and end at approximately 8 p.m. The cost is US$10 per person, which is in addition to the regular park admission fee of C$75 for foreigners and C$20 for Nicaraguan residents.