Since its establishment as Nicaragua’s capital and nerve center in 1855, the city of Managua has seen its share of wealth, man-made tragedy, natural disasters, and political upheaval. Along with the other cities in the north such as León and Estelí, it was heavily involved in both the revolution as well as the Contra War during the 1980s. Older residents still recall the memories of aerial bombings and names such as Sandino, Somoza, and the Sandinistas are still deeply part of its history. 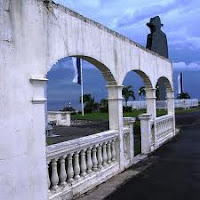 Located on one of the highest hills within the city is the Loma de Tiscapa, also known as the Parque Histórico Nacional Loma de Tiscapa. This national historic park is known for its panoramic views, volcanic lagoon, and the former palace of notorious Anastasio Somoza García. From this vantage point, you can see the Zona Monumental (the pre-1972 earthquake portion of the city), both Lake Managua and the 4,255-foot Momotombo Volcano to the north, as well as the Zona Rosa entertainment district to the south.

Access to the area is from a paved road behind the pyramid-shaped Crowne Plaza Hotel and the entrance fee is only C$20. Crowning the hill is the famous 59-foot black silhouette of Augusto C. Sandino and it quietly stands as a reminder of times that are now long gone. It marks the location of the magnificent presidential palace where Sandino signed the peace treaty that ended his guerrilla war against the Liberals and where he was also assassinated after a dinner with Somoza in 1934. The site was eventually transformed into a notorious prison (Las Masmorras) complete with torture cells. With simple words such as "Take him to La Loma," it either meant an appointment with a senior official or the beginning of a horrible nightmare.

But after years of struggle, it was the Sandinistas who would have the last word by removing the Samozas in 1979. Today, it includes several attractions that really sum up what the country has gone through. There is tank sent by Benito Mussolini to Somoza along with one of most peculiar attractions: the bronze backside of a horse, which is all that remains of the dictator’s mounted statue. It is a fitting and humorous homage to the controversial leader. The park also hosts a variety of historical exhibits in what remains of the palace, which was mostly destroyed in the 1972 earthquake.

Canopy Tour: Located on the southern side of the park is the Canopy Tour Tiscapa. It is unique for being the only canopy tour above a lagoon in Central America. Although it looks somewhat dilapidated, it is a fully functioning zip-line tour that crosses the lagoon from the hilltop to the shore down below. From the thatch-roof platform, you can launch onto three zip lines of varying lengths (with a total length of approximately one mile in either a seated or forward-facing position. For the more courageous, it is possible complete the ride hanging up-side-down. Afterwards, you have the choice to either walk back around the perimeter of the lagoon or ride back to the hilltop by truck. It costs approximately US$15 (depending on the varying exchange rate). In the busier periods, it is easy to find. Just follow the screams.
For more information about other attractions in Managua, read my post: Exploring the City of Managua, Nicaragua.﻿
Posted by JHNWriter