The sheer size of these incredible ruins can seem daunting at first, but there is a certain magical quality about them that is unlike any of the other Mayan sites in Central America. As the centerpiece within the Parque Nacional Tikal (Tikal National Park) located in northern Guatemala, this former grand city includes more than 4,000 incredible structures  that visitors can explore. Highlights include many large palaces, a number of ball courts, smaller residences as well as five temples with some that tower above the rainforest at heights of more than 200 feet. The city's main area once covered an area of six-square miles and researchers estimate that the population may have sprawled at least 47-square miles. The entire site is spectacular and so well preserved that at times it seems almost unreal.

Although evidence of early stone buildings at the site date back to 500 B.C., its peak really occurred between A.D. 600 and 900 after its rulers had conquered many of the surrounding cities and established their dominance as far as Copán in Honduras. Based on archaeological estimates, the population during this period had reached upwards of 100,000. But mysteriously, construction ceased and the city was abandoned by A.D. 900 only to be slowly covered by the surrounding rainforest.

For the next 1,000 years, Tikal remained hidden and stories of its existence were passed down through the generations. But in 1848, it was officially rediscovered by a government expedition who found the impressive remains and published their findings with the Berlin Academy of Sciences in 1853. As more and more of the remains were unveiled, scholars arrived in search of how this mysterious city had evolved. Its largest restoration project was completed by the University of Pennsylvania from 1956 to 1969 and it uncovered thousands of structures over an approximate 10-square-mile area. Today, most of the major restoration has been completed and Tikal is protected as a UNESCO World Heritage Site.


When visiting Tikal, you have to remind yourself that it is a major tourist destination and at peak times, bus loads of travelers swarm into the area. With three on-site hotels, a campground and plenty of guided tours, it can get pretty crowded. But once you climb the first temple, the view is so spectacular, you won’t even notice that they are there. If you are traveling independently, one of the best times to arrive is when the park opens at 6 a.m.  This is well before when the majority of tours show up and for a brief moment, you can experience the location in a more peaceful setting. If you are lucky, you can even watch the sunrise.

Near the entrance, there are two official museums: the Museo Lítico and the Museo Tikal. The Museo Lítico includes a scale model that shows how Tikal would have looked around A.D. 700. Both of the museums include artifacts from the ruins that range from small jade jewelry and flints to larger ceramics and stone figures. I always prefer to stop by any museum with artifacts from the site, mainly because you won’t see them any other way and it also helps you get into the mood for exploration. Since there are so many areas to explore, the following are the main attractions to see:

As seen in the photo at the top of this post, the Great Plaza was the central core of the entire site. It includes the North Acropolis and Temples I and II, which act as gigantic bookends to the plaza itself. This plaza was once the location of both ceremonial and religious activities for most of its long history. The fact that the remains of severed heads were found nearby show the extent of human sacrifice that once occurred there.
Temple I: Known as the Jaguar Temple, it was discovered in 1962 during the extensive University of Pennsylvania project. It is a pyramid dedicated to the former ruler, Hasaw Chan K’awil, who was buried in its central tomb back in the 8th century. A replica of the tomb can be seen in the Museo Tikal. The temple is approximately 150 feet high and the shrine at the summit includes three chambers and three consecutive doorways designed with decorative lintels, which are hand-carved wooden components added to an entryway. Each a historical treasure, most of the lintels at the site have been taken and housed in a number of museums around the world. Fragments of this temple’s lintel are located in the British Museum’s warehouse in London, England. 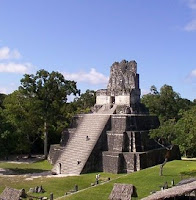 Temple II: This temple is also known as the Temple of the Masks due to the two masks (now mostly eroded) that border the central stairway. Approximately 125 feet in height, it is dedicated to the wife of Hasaw Chan K’awil. Its summit can be reached by a steep main stairway (as seen in the picture to the left) and the shrine includes three chambers with the queen’s portrait carved into the one of the lintels.

North Acropolis: This area pretty much consumes most of the northern side of the Great Plaza, and it contains some of the most complex and studied structures of any Mayan ruin. It is a fascinating area where each royal burial produced a new temple that was built on top of the older one. By the A.D. 900, eight pyramids had been built including 30 altars and more than 40 stelae (stone monuments).

Temple III: Known as the Temple of the Jaguar Priest, this 180-foot tall pyramid was the last one to be erected at Tikal. The shrine at the summit includes two chambers and the roof lintel shows Dark Sun performing a ritual dance. This is also the only temple whose lintel is still located in Tikal (at the museum's warehouse). The others were removed in the late 19th century and housed in various museums around the world.
Temple IV: Pictured are Temples I, II, III as seen from the top of Temple IV. Built in A.D. 741 for Yik’in Chan K’awil (the son of Hasaw Chan K’awil), it is the tallest pyramid at Tikal with a height of 230 feet. It includes an exciting climb to the summit on wooden ladders and protruding roots, and the views from the top are simply unmatched. In my opinion, Temples IV and V are the two temples that should be climbed by every visitor.

Temple V: Located adjacent to the South Acropolis, this temple is the second tallest pyramid at the site with a height of 187 feet. Although my favorite is Temple IV, most visitors say that you haven’t truly experienced Tikal if you do not climb this temple. It dates back to A.D. 700 when Nun Bak Chak ruled the city.

Temple of the Inscriptions: Also known as Temple VI, it is located a little more than a half-mile southeast of the Great Plaza is this interesting temple that dates back to A.D. 766. It is mostly known for its 39-foot-high roof comb that includes faded hieroglyphs on both its back and sides.

For more information about the El Mundo Perdido (The Lost World) at Tikal, read my post: Exploring the Lost World at Tikal in Guatemala.