Currency and Tipping in Honduras 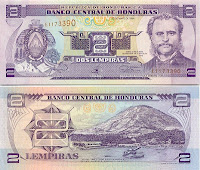 The currency of Honduras is the lempira, which is named after the 16th-century Lenca ruler who was known for leading the native resistance against the Spanish conquistadors. It was introduced in 1931 and it is available in both paper bills as well as four types of copper-nickel coins: 5, 10, 20 and 50 centavos. The colorful paper bills are available in denominations of 1, 2, 5, 10, 20, 50, 100, and 500. Although the Honduran exchange rates usually hover around 19 lempiras for one U.S. dollar, rounding up to 20 lempiras per one U.S. dollar is the best way to estimate what things will cost and to keep things mathematically simple. This type of quick calculation is especially helpful when haggling in a market or buying items in a local restaurant. 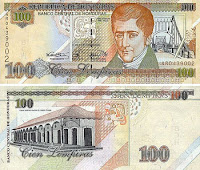 The lempira bills are known by both their colors and whose face is being honored. Several examples include the purple 2-lempira bill (seen above) with the face of Marco Aurelio Soto, who was an influential liberal President of Honduras in the late 1800s, and the orange-tinted, 100-lempira bill (seen to the left), which includes José Cecilio del Valle, who was one of the most important figures in Central America during the transition from a Spanish colonial government to independence. 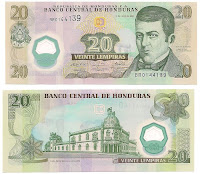 In January 2010, a new polymer 20-lempira bill was introduced into circulation to replace the lighter paper version. It still includes the face of Dionisio de Herrera, who was a Head of State for both Honduras and Nicaragua in the early 1800s.


Each Central American country has their own regulations about this activity, but currency exchange on the street in Honduras is something to be very careful about. Once the moneychangers spot you, they will approach you eagerly in hopes of making money off of your needs. They are conveniently located everywhere from the parque central in the large cities to the airports and bus stations. But after hearing their exchange rate, always use the approximate 20-to-1 ratio to realize how much you might be paying (or losing) for this convenience. I have used them especially before crossing the border just to get rid of the bills that I no longer need. If the rate is too outrageous, then simply keep them for posterity or for you next trip to the country. 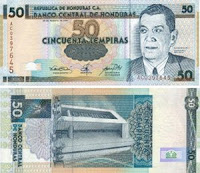 Fortunately, ATMs are available throughout most of the cities throughout Honduras and operate under the BAC/Credomatic, Banco Atlántida, or Unibanc systems. This should allow anyone with a MasterCard or VISA debit card to make reliable transactions and withdrawals. ATMs are one of the best ways to get cash and the machines usually give you denominations of 50 lempiras, which are sometimes hard to break. I try to use the larger bills for substantial purchases and use the smaller denominations for food, taxis and other necessities. But like anything, convenience comes with a price and your bank knows it by adding a 3-percent fee in addition to the usual bank fee for using an ATM not owned by your bank. The positive side is that you will receive the latest exchange rates. Again, my word of warning about using ATMs is to always use common sense when withdrawing large sums of money. Note your surroundings and be aware after you walk away from the ATM with a large amount of cash because someone could be watching you with bad intentions.
Credit Cards


Credit cards are generally accepted in larger businesses such as major supermarkets, department stores and hotels, but always keep in mind that many smaller businesses and family-run stores do not accept credit cards at all. Be prepared for a surcharge of up to 15 percent.
Tipping
At the Airport: When arriving at the airport in either Tegucigalpa or San Pedro Sula, you have a choice of carrying your own bags from baggage claim or getting an eager skycap to carry them for you. If you choose to use their assistance, these handlers should receive US$1 per bag with no more than US$2 per bag for large, heavy items. U.S. dollars are always welcome and expected at the airport since many travelers have not had the opportunity to change their currency.

At the Hotel: For anyone handling luggage, follow the same rule as you would in the airport: No less than US$1 per bag and always give more for large, heavy pieces of luggage and for anyone looking like they are really "sweating it out" for you.

At the Restaurant: Tipping is not expected in the majority of Honduran restaurants except for upscale establishments who expect at least 10 percent. Only on rare occasions is a service charge added and this is generally for finer restaurants when you walk in with a group of 10 people or more. Since tipping is not expected, never leave your tip on the table because it will disappear very quickly and NOT by your friendly waiter! So if your waiter went above and beyond working for your table, make sure to personally hand him/her the tip on your way out.


Car Parking: As I have mentioned in several other posts, there is no differentiation about this aspect of parking your car in Central America. There will always be someone willing to "watch your car" as you go into any business or shopping area. Despite their eagerness, I am still unsure if they actually watch your car the entire time, but at least it gives you some peace of mind, especially if you have a rental with a high deductible. Tipping them is definitely expected and the amounts should always be at least 10 lempiras for those who simply stand there near your car or more for ones who actually stop traffic on your way into the parking spot. Others will go as far as actually washing your car! In these instances, the more the better and you know that these guys really appreciate and need the money no matter how small.
Posted by Sir Runner James