Many visitors to the country of Costa Rica seem to skip the busy city of San José entirely or use it primarily as a launching point to explore the rest of the country. There are some really gorgeous locations away from the city but for those who quickly leave, they are missing opportunities to visit a city that includes friendly people, peaceful parks, exciting markets, brick-lined streets, and the country’s best museums. Besides, it only takes an extra day or two, so there is no substantial loss of time before hitting the beaches or that beach resort.

San José is the largest city in the country and it naturally serves as the capital city as well as the hub for all commercial and governmental activity. This constant activity has attracted approximately one-third of the country’s population who come in search of employment. This densely-packed city is situated in the Central Valley near the Cordillera Central (Central Mountain Range) and it includes one of the largest airports in Central America: the Juan Santamaría International Airport, which is approximately nine miles northwest of downtown in Alajuela. After you arrive and clear customs, there are several ways into downtown San José: by bus, shuttle or taxi.
Bus or Shuttle: There is a bus stop conveniently located outside of the airport on the other side of the parking garage. For less than US$1, you can be downtown within 30 minutes (depending on traffic). My suggestion is to take the Easy Ride Shuttle Service (www.easyridecr.com) and for US$29 (for up to the two people), it provides door-to-door service 24-hours-a-day directly from the airport to your hotel. The mini-buses are clean and comfortable.

Taxis: Taxis are lined up at the airport just waiting for their next fare and the ride costs around US$30. Always make sure to take only the licensed taxis. They are easily noticeable by their reddish-orange colors and their Costa Rican logo. Also plan ahead and tell the driver that your destination is a well-known hotel or landmark because an exact street address is not normally used. If your hotel is smaller or not as well known, just find the nearest large hotel or landmark near it and go from there. 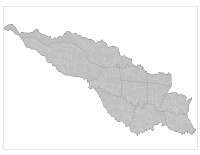 Orientation: Like I mentioned earlier about the approximate use of addresses, it is still helpful to have some general orientation about the city. It is built much like any other colonial city in Central America, with a grid design where avenidas run from west to east and calles run from north to south. The center of the city is logically located at the intersection of the Calle Central and the Avenida Central. As seen in the image to the right, there are 11 districts that are divided up into at least a couple hundred barrios (neighborhoods) and it is good to know at least the names of the primary areas and what they offer:

Downtown – This is the busy center of the city that includes the Teatro Nacional, the Catedral Metropolitana and some of the best hotels. It also includes the Plaza de la Cultura, which many Ticos refer to as the heart of the city. The tourist information center is also located there where you will find many tour companies ready to take you away for a wide array of tours ranging from zip lines to volcano hikes. In addition, there are several artisan markets located downtown with the primary one known as the Mercado Central.  Located near Avenida Central and Calles 6 and 8, it is worth a stop since you will find everything from leather and ceramic crafts to every possible souvenir you can think of.
Paseo Colón – Located west of the downtown area, it consists of many restaurants and a variety of smaller hotels. There is also a nice shopping and eating area (blocked off to vehicle traffic) between Calle 2 and Calle 5.

Parque La Sabana – Like New York’s Central Park, this is San José’s version. It is located west of Paseo Colón and there is plenty of space. In fact, it was once the location of the city’s international airport before it moved to the much larger one near Alajuela. It is a great space for biking and jogging or just sitting on the grass next to the lake and listening to the city’s noise swirl around you. It also the home of the National Stadium, and The Costa Rica Art Museum, also known as the Museo de Arte Costarricense.

Barrios Amón – Located northeast of Avenida 5 and Calle 1, it is one of the few remaining colonial districts in the city. The Spanish colonial structures include many that date back to the 1800s. It can be a convenient and relatively peaceful stay if you book one of the beautiful boutique hotels there, which are all walking distance to a number of restaurants. These characteristics make the neighborhood popular with both travelers and expatriates.

San Pedro – This neighborhood, located east of downtown, is home to the University of Costa Rica and some of the city’s best nightlife. This naturally comes from the many college-oriented restaurants, bars and clubs. From downtown, you can easily catch a bus from the Avenida Central near Calle 9. The buses leave every 10 minutes, so don’t worry about schedules. The neighborhood’s main area is the Avenida Central, which includes most of the best restaurants and shopping at the Mall San Pedro (seen to the left).

Escazú and Santa Ana – These two nice neighborhoods are located in the hills west of San José. In addition to the views, it includes a relatively large expatriate community and smaller bed-and-breakfast accommodations that are just wonderful.

For more information about the city’s main attractions within these neighborhoods, read my post: Visitor Attractions in San José, Costa Rica.
Posted by Sir Runner James