Climbing the Barú Volcano in Panama 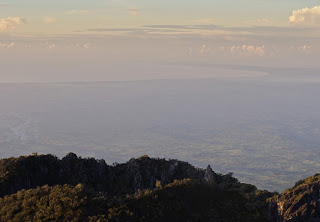 There is a special feeling when it comes to standing on the highest peak of a country and the Barú Volcano in Panama, also known as the Volcán Barú, is no exception. This massive, 11,398-foot dormant volcano is located approximately 22 miles from the border of Costa Rica in the western province of Chiriquí. In fact, it is so large that it dominates the skylines in the towns of Volcán (just to its west) and Boquete (to its east) and it can actually be seen from the city of David, which is located approximately 30 minutes to the south. The town of Cerro Punta, located on its western slope, is so closely tucked into its landscape that you can actually lose visual perspective where it appears that the volcano is not even there at all. The overall size and height is what makes the volcano special and the hike to its summit and the Caribbean Sea (as seen in the photo above).

According to a 2008 report filed by the U.S. Geological Survey (USGS), the volcano has had four eruptive periods during the last 1,600 years with its latest occurring in the 16th century. But in 2006, some seismic activity and ground deformation caused enough concern that the volcano was reported to be "potentially active." Based on its history, it has the potential to not just be eruptive, but explosively eruptive, as seen in the A.D. 700 explosion that wiped out the human population in the nearby town of Cerro Punta.


As a precaution, the USGS is doing reconnaissance and studies in cooperation with the National Secretariat for Science, Technology and Innovation (SENACYT) of the Republic of Panama. In other words, it is being closely watched.
In the meantime, the volcano serves as the major tourist attraction in the province and its upper slopes and summit is the centerpiece of a 35,000-acre national park known as the Barú Volcano National Park, which was established in 1976. This incredibly large national park is one of the most visited in the country, not only because of the volcano itself, but due to the wide array of landscapes that include six different climate zones. They range from humid mountain forests and tropical forests to the páramo, which is a high-altitude area that consists of shrubs and volcanic remains.
﻿﻿One of the best aspects about the location is that it offer a variety of activities for each visitor. For example, the active hiker can make the challenging and exciting trek to the summit from the town of Boquete while avid birdwatchers can take the popular Sendero Los Quetzales, which departs from the National Authority of the Environment (ANAM) station in El Respingo. This trail takes approximately three hours to complete, or more if you stop to admire all of the quetzals and toucans. As I do with many locations, I recommend hiring a guide since these individuals are both affordable and extremely knowledgeable. Best of all, many local guides come from the nearby communities and your fees are a way of giving back to the local economy.
﻿
The best way to access the park and the volcano itself is from the town of Boquete, which is approximately 10 miles to the east. The Boquete Visitor Center (located on Main Street) is also one of the best places to arrange a guided tour of the volcano (www.boquetevisitorcenter.com). Another reputable tour company is Habla Ya, which offers a variety of affordable guided tours of the volcano that even include camping out on the volcano itself (www.hablayapanama.com).
The Barú Volcano can appear inviting and relatively easy due to the wide and clearly marked road to the summit. But do not be deceived. The trek is a challenge that includes a long, slow ascent of approximately 8.5 miles with a rise in elevation of more than 6,000 feet. Like many other high-altitude treks, all hikers should never travel alone and always be prepared for extreme weather and temperature changes, mild altitude sickness, and possible emergencies. An important piece of advice is to bring enough water for your trip since there are no water sources (other than rain) once you leave the registration station. I recommend carrying at least two liters of water for the both the ascent and descent just to be safe.
﻿﻿In regard to climate on the hike, the average annual temperature can vary between a refreshing 68 degrees Fahrenheit to a colder 50 degrees F or less at night for altitudes under 6,000 feet. Summit temperatures can even reach below freezing and formation of frost occurs frequently in addition to the occasional snowfall. To make matters more challenging, it can also rain at any time without regard to being in the dry or wet season. Based on these varying temperatures, hikers should always wear layers in addition to a warm hat, gloves and breathable waterproof clothing.
The most common route to the summit is by taking the road from Boquete where you have a choice of either riding a 4x4 (assuming that you have your own transportation while traveling in a group) or hiking on foot. The 4x4 ride lasts approximately 45 minutes but it can eventually become bumpy enough where you might want to consider hopping off and walking instead. Hiking on foot can take up to eight hours for the ascent and around five hours for the descent. Surprisingly, the road has its share of downhill moments but these short-lived sections are generally answered by an incredibly steep portion. The steepest portions are located within the first two miles, between miles 3.75 and 5.5 as well as all of mile 7.

The best time to reach the summit is around sunrise since the weather has not had a chance to change for the worse. Many tour groups leave the day before and hike to the Fogones campground, which is around 700 feet below the summit. After camping for the night, the final ascent is made just in time to watch the sun rise before heading back down. More adventurous hikers start their trek around midnight, watch the sunrise and complete the descent on the same day.  The overall reward is the view from the summit, which is unforgettable. Both the Caribbean Sea and the Pacific Ocean can be seen from this vantage point as well as the rest of Panama to the east and Costa Rica to the west.
Posted by Sir Runner James