Many visitors to Costa Rica seem to skip the bustling city of San José entirely or use it primarily as a jumping point on their way toward other scenic destinations. But for those who choose to quickly leave, they are missing opportunities within the city to explore tree-lined parks, vibrant markets, charming neighborhoods with brick-lined streets, and some of the country’s best museums.
San José, much like many other large Central American cities, is a mix of both wealthy and poor with luxury stores and hotels sharing the same sidewalk as vendors and musicians in search of small change. Although the city is relatively safe for visitors, the usual problem spots are located near the Terminal Coca-Cola and areas north of the Mercado Central. As always, avoid traveling alone and do not explore unknown neighborhoods after dark. If you have to go out, then take a taxi.

Main Attractions in San José
Catedral Metropolitana: Also known as the Metropolitan Cathedral, it is San José’s main cathedral located at Avenida 2 and Calle Central. I always enjoy visiting these architectural treasures because they seem to tell a story about their long histories. This cathedral is no exception and it was built in 1871 after the original structure was mostly destroyed by an earthquake. It was then rebuilt in an interesting combination of Greek Orthodox, Neoclassical and Baroque styles. Make sure to step inside for a short respite from the hectic world just outside. There is a warmth and glow of the interior that makes its extra special. It is not surprising to see numbers of people who come in for a brief moment of reflection.
﻿﻿

Teatro Nacional de Costa Rica: Located at Calle 3 and Avenida 2 in the Plaza de la Cultura, this structure first opened in 1897 after six full years of construction. It is one of the finest historical buildings in the city and its ornate lobby is well worth a visit. It includes sculpted banisters, marble floors and the country’s most famous mural depicting crops that helped define Costa Rica: coffee and bananas. If you have time, step inside and view the grand staircase, which was inspired by the one in the Paris Opera House. It is also your chance to purchase a ticket for a variety of performances, which are held throughout the year. More information about theater and concert schedule can be found at www.teatronacional.go.cr.

Museo de Arte Costarricense: This museum (www.musarco.go.cr) is one of the best in the country. Located at the end of the Paseo Colón in the Parque La Sabana, it is a great example of a city re-using a former structure instead of destroying it. In this case, this building was the former terminal and control tower of the international airport. It includes the best collection of art by Costa Rican artists, a beautiful sculpture garden, and the Salón Dorado, which includes walls carved and painted to look like gold that depicts the history of the country. 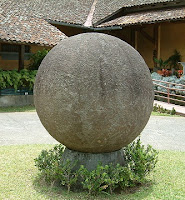 Museo Nacional: This museum (www.museocostarica.go.cr) is located at Calle 17 and Avenida 2. It was originally a fort known as the Fuerte Bellevista that was used during the civil war in 1948. It is also the site where Costa Rican President José Figueres first announced that he was abolishing the country's military in 1949. As a reminder of more hostile times, you can still see the bullet holes on its walls. It has been transformed into the country’s best historical museum where you will learn about Costa Rican history and early Costa Rican life. There is a large permanent collection of pre-Columbian art and jewelry, ancient grinding stones, a butterfly garden, and strange stone spheres, which are located on the rooftop courtyard. The fort’s highest point also provides great views of the city, so make sure to stop there before you leave.

Museo de Oro: Known as the Museo del Banco Central de Costa Rica (www.museosdelbancocentral.org),  it is actually located underneath the Plaza de la Cultura. It was founded in 1950 by the Central Bank of Costa Rica, and it includes an exploration of Costa Rican culture. Its primary exhibit consists of a huge amount of pre-Columbian gold that dates back to 500 A.D. (thus the museum’s name) as well as currency. If you are interested in the history of money and gold, this is the place to go.

Centro Nacional de Arte y Cultura: This special attraction is located at Calle 13 and Avenida 3 in some of the oldest buildings of the city. It is the home of the Cultural Ministry as well as the Museum of Contemporary Art and Design, and it includes two active theaters that present contemporary art in addition to live, modern dance performances and theater productions. Performance and exhibit schedules are posted everywhere, even at the airport.

Parque Nacional de Diversiones: Located about one mile west downtown San José in Uruca is this unique amusement park (www.parquediversiones.com). I say unique because it is the only amusement park in the world that gives 100 percent of the profits to charity! It was originally built in 1964 in order to raise fund for a Children’s Hospital when a polio epidemic struck the country. The current hospital still runs on funds provided from this park. It includes roller coasters, water slides, and even a flight simulator and it is good to know that your money is going toward a great cause.