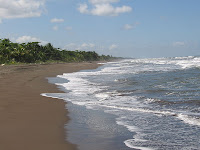 Tortuguero National Park, known in Spanish as the Parque Nacional Tortuguero, is located on the Caribbean coast of Costa Rica approximately 158 miles northeast of San José. Despite its isolated location, it is one of the country’s most visited destinations. The park includes habitats that range from rainforests and swamps to beaches and lagoons, and its natural system of canals are home to a wide variety of marine life. But the majority of visitors come to the park to view any of the three different species of sea turtles that use it as their nesting grounds: the green turtle, the hawksbill, and the leatherback, which is one of the largest turtles in the world.
Entrance to the Park

The main entrance to the park, also known as the Cuatro Esquinas Station, is located just south of the town of Tortuguero. The park is open daily from 8 a.m. to 4 p.m. and admission is US$10 per person. The most popular trail is El Gavilán Trail. It is approximately one mile in length and begins at the park entrance, winds through the rainforest by a small swamp, and ends right on the beach. It is a great way to become oriented with the park. For those who want more, you can actually continue south along the beach for another 18 miles.

There are three park stations located within the Tortuguero National Park: Cuatro Esquinas, Sector Jalova, and the Aguas Frias. They are also the starting points of several scenic hiking trails.

Cuatro Esquinas – Located at the northern end of the park, it serves as the main entrance and the primary access point to the beach. It is also the starting point of three trails that include El Gavilán (stated earlier) as well as La Ceiba and La Bomba, which both lead to the Cerro Tortuguero.

Cerro de Tortuguero – This volcanic hill looms on the horizon 3.75-miles north of Tortuguero. The climb includes a gentle ascent and it takes about one hour to reach the top from either the Ceiba or Bomba trails. The 390-foot "summit" offers great views of the surrounding rainforests as well as the inland canals.

Sector Jalova – This station is located at the southern end of the park, near the Jalova lagoon. It is the starting point of three hiking trails: Tragon, La Ranita Roja, and El Tucan, which is a great trail that travels parallel to the Cano Negro waterway.


Aguas Frias – Located inland on the western border of the park, it can be reached by turning north off of the highway in Guapiles and driving through the town of Cariari. It is the starting point of the Los Raudales trail that ends at the scenic lookout point at Lomas del Sierpe.


The majority of the park’s visitors simply come to see the turtles. Although there are literally hundreds of tours ranging from short trips on the beach to all-inclusive packages at local lodges, you can visit the park independently by just staying in the village and arranging a trip with a certified, local guide. The town of Tortuguero includes more than 100 certified guides ready and willing to take you and the majority of them conveniently hang around at the main dock. Just be aware of the nesting periods: July to October (for green turtles and hawksbills) and March to May (for leatherbacks). Overall, the most common turtle seen by visitors is the green turtle.

The turtle tours depart each evening beginning at 8 p.m. and can last anywhere between two and four hours. A guide costs approximately US$20 per tour, which does not include the park entrance fee of US$10. In addition, there are several important rules to follow in order to protect the delicate landscape around the nests. In other words, all visitors are simply observers.

﻿
The rules are simple: 1) Each group is limited to 200 guests; 2) No one is allowed on the beach at night unless they are accompanied by a certified guide; 3) Wear dark clothes, white t-shirts are not permitted; 4) Flashlights and any equipment with a flash (video camera, or camera) are not permitted; 5) Smoking is not allowed. 6) All tours must end by midnight.

In addition to the popular turtle tours, taking a boat tour is an excellent way to explore the canals and lagoons of the park. The waterways are similar to traveling along the Amazon River (just at a much smaller scale). You will see a wide array of wildlife that includes monkeys, herons, cranes, and even the rare manatee. There are plenty of guided tours based in Tortuguero with hourly rates between US$15 and $20 per person. Simply ask the management at your accommodation and they can quickly arrange one for you. If you prefer exploring on your own, there are also places to rent canoes and kayaks, known there as either cayucas or botes. But make sure to check out the canoes before renting one. Some are the older dugout canoes, which are generally heavier and difficult to maneuver. Try to rent the lighter, modern canoes instead or just pick a reliable kayak. The rates average US$3 for up to three hours.
For more information about getting to the park, check out my post: Getting to Tortuguero National Park in Costa Rica.
Posted by Sir Runner James