Traveling to the City of Antigua in Guatemala

Located approximately 30 miles west of Guatemala City in Guatemala is Antigua. This historic city was once the bustling capital and one of the grandest cities in Central America until it was nearly reduced to rubble by not one but two large earthquakes in the 1700s. After the second one in 1773, the government ordered that the capital be moved to the "safer" location of Guatemala City. I say "safer" because Guatemala City has actually had more earthquakes than Antigua with strong ones in 1902, 1917, 1918, and 1976, which was a 7.5-magnitude one that killed and injured approximately 25,000 people. Today, the city includes cobblestone streets, a number of incredible ruins, and spectacular surroundings complete with a stratovolcano sitting on its horizon. It is no surprise why Antigua has become one of the top tourist destinations in Guatemala. 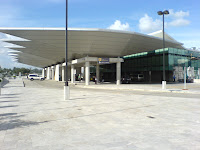 First of all, there is no airport or train station in the city of Antigua, so do not make the mistake of booking a flight to Antigua (with the airport code of ANU) because you will end up on an island in the Caribbean Sea. Anyway, the nearest airport is located in Guatemala City, which is called the Aeropuerto Internacional La Aurora (The Aurora International Airport). The drive from the airport can take anywhere between 45 minutes to one hour depending on traffic out of congested Guatemala City. Since driving to Antigua is the only option, my suggestions of getting to Antigua are in three different categories: rental car, shuttles, and public transportation, affectionately known as the "chicken bus."
Rental Cars: For those who prefer renting a car, La Aurora International Airport in Guatemala City is the best option. You have a choice of many rental agencies with familiar names such as Avis, Budget, Dollar, Hertz, Payless and Thrifty with the two exceptions being Holiday Autos and Sixt, which are more familiar to European travelers. The rental rates are surprisingly low but be prepared to drop a substantial deposit for overall coverage.

Afterwards, head west of Guatemala City on the Calzada Roosevelt, which turns into the familiar Pan-American Highway, also known as the CA-1. Follow all signs marked "Antigua" and turn off the highway at San Lucas Sacatepéquez and head south toward Antigua. It is pretty straightforward and best of all, the roads are nicely paved!
Shuttles or Taxis: Taxis regularly run between La Aurora International Airport and Antigua but be prepared to pay approximately US$30 depending on exchange rate. Considering that it could cost much more than that to get to the airport back home, it is a reasonable deal. Use common sense when selecting a taxi and never use private drivers that offer their services.


One of the most convenient and affordable ways to travel to Antigua is by shuttle van. Several shuttle companies run directly from the airport to Antigua and cost only around $US10. I would recommend either the Turansa Company (www.turansa.com) that has been in business since 1988 or Adrenalina (www.adrenalinatours.com), which provides door-to-door shuttle service. Yes, as their name suggests, they also provide a variety of high-energy, guided tours of the country.
"Chicken Bus" Transportation: If you traveled anywhere in Central America, then you have definitely seen this type of public transportation. Known as the "chicken bus" (because of the livestock that locals sometimes carry on board), it is a retired yellow school bus from the United States that has been lovingly repainted in bright colors. Traveling this way is the cheapest way to travel but this affordability comes at a cost because they are normally crowded, hot, noisy, and a haven for pickpockets. But this is such an important part of the culture, that everyone must try it at least once when traveling in Central America. 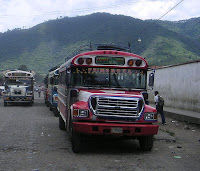 When taking the bus from La Aurora airport, you can walk to a bus stop located outside of the airport parking lot. Several friends of mine have noticed that the government can sometimes prevent buses from stopping at the airport and require them to pick up passengers about a quarter-mile away. If this happens, then either take the walk or take the shuttle. Otherwise, keep an eye out for the bus with the name of the destination on the front and be aware since there are no posted or announced schedules. Once the bus arrives, just hop on if you are traveling light. If you have luggage, then hand it to the attendant who will throw it up on top of the bus. As the journey continues, the attendant will eventually come down the aisle to collect the fare, which is only around US$2. Remember that this mode of transportation is only for those who really want to immerse themselves into the culture. So if you feel uncertain, or believe that safety might be a concern, then by all means take a shuttle for that extra peace of mind.