Currency and Tipping in Costa Rica 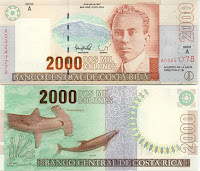 These numbers appear extremely high but like many foreign countries, Costa Rica’s currency can fluctuate, especially against the U.S. dollar. After checking the average exchange rate for the past few years, the rate was 540 to the dollar in 2008, 545 in early 2010 and 514 in late 2010. Based on this, it is safe to say that one U.S. dollar equals approximately 500 colónes. In my experience, this is the best way to estimate what things will cost and how much you might be getting a fair or unfair exchange rate. 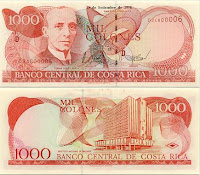 The rest of the higher bills are affectionately given nicknames, much like how Americans call the $100 bill a "Benjamin." The 1000-colón bill is known as "un rojo" (one red) because of its red color. Higher amounts are simplified such as the 5000-colón bill, which is called "cinco rojos." It is also called tucán because of its image of a toucan. The 10,000-colón bill is  known as the "Emma Gamboa" that refers to the image of the country’s well-known teacher.

Each Central American country has their own set of rules about this activity, but currency exchange on the street is illegal. To make things worse, the majority of money-changers are out to cheat every client and sometimes go as far as handing out wads of counterfeit bills. 5000-colón bills are popular fakes on the street as well as $100 U.S. bills. One of the safest ways to exchange money is at a bank or at the hotel that offers currency exchange. These locations usually provide a reasonable rate.

Although it is convenient, avoid exchanging money at the currency exchange kiosks in the international airline terminals back home. In the U.S., the currency exchange booths tend to have the worst rates whether you are at the Dallas, Houston, Atlanta, or New York airports. You will on average receive about 20-percent less than the fair rate. Finally, if you do plan to bring dollars to exchange, keep the denominations no larger than $50. According to the Costa Rica Tourism Agency, "There is some paranoia about counterfeiters and many stores won’t take anything over a $20 bill if they accept dollars at all."
ATMs and Credit Cards


Fortunately, you will find ATMs that use both the Cirrus and PLUS network in Costa Rica. Generally, a fee of 3% is applied to any amount withdrawn in addition to the usual bank fee for using an ATM not owned by your bank. But you will get the latest exchange rate and feel pretty secure knowing that it is fair as well as convenient. A word of warning about using ATMs: use common sense when withdrawing large sums of money. Much like an ATM in an unknown neighborhood in New York City, always check out your surroundings. You could be watched and become a magnet for possible trouble.
Credit cards are accepted in a majority of larger businesses throughout metropolitan areas but many smaller and family-run businesses do not accept credit cards at all.
Tipping
At the Airport: After arriving at the airport and clearing customs, you have the choice of carrying your own bags or getting a skycap to help you out. If you choose to have assistance, handlers should receive no less than 50 cents per bag with no more than US$ 1. In fact, U.S. dollars are always welcome and expected since many travelers have not had a chance to exchange their currency.
At the Hotel: No matter what type of accommodation you stay at, someone will always try to take your luggage to the room, even if it is just the backpack on your back. For anyone handling my luggage, I follow the same criteria from the airport: No less than 50 cents per bag.

At the Restaurant: Restaurants in Costa Rica generally add a 10-percent service charge to the bill. Tipping past this amount is not expected and very few people do it, if any. But if you want to leave some more, just use some common sense. Did you stay two hours longer than the meal to chat with a friend? Did your waiter go above and beyond for service at your table? Did you ask the waiter to hand-pluck the chicken you ordered for your meal? Then by all means add some more!

Car Parking: No matter where you go with a car in Central America, there will always be someone eager and willing to "watch your car." I say this with "quotes" because I am never terribly sure if they actually watch your car at all or (in rare circumstances) guard your car with their life. Tipping them is highly expected and it could range anywhere between 200 colónes to as high as 500, depending on how much they have done. Some simply watch your car by just standing near it while others go as far as stopping traffic when you arrive and leave. In some cases, a team of people watch you car and even wash it. Either way, it does give you some peace of mind, (especially when you have a rental) and these guys probably need the money much more than you do.
Posted by Sir Runner James