Exploring the City of San Salvador in El Salvador

San Salvador is the capital and not surprisingly the largest city in El Salvador. I say this because every Central American country has at least one major hub of commercial activity and those seeking employment tend to gravitate toward these locations. In this case, it is the city of San Salvador. Many visitors tend to steer away from the country altogether and go to more tourist-friendly locations such as Costa Rica, Nicaragua, or Belize, but El Salvador is all about the unexpected. On a number of occasions, visitors who once ignored the country now say the same thing: "I never thought it could be so beautiful and that I could enjoy it as much as I did!"


Yes, El Salvador has had a long history of civil war, senseless brutality and most recently, gang violence. But the long and bloody civil war ended more than 20 years ago, and the crime seems mostly centered around rival gangs. With the right precautions and common sense, foreign travelers can and usually remain relatively untouched. From its unique museums and monuments in San Salvador to the mere fact that a relatively active volcano looms on its horizon, the city is a worthy destination. So make sure to see the following sites before venturing off toward the country’s Pacific beaches, which are known as the hidden treasures of Central America.

First of all, expect the city of San Salvador to be crowded, busy, and noisy. Traffic seems to rush around apparently with no rules and it can be pretty chaotic. But I tell everyone that once you expect this type of setting, it doesn’t appear to be so bad once you are in it. The point is to always "take in" the culture for what it is because the atmosphere alone should be the primary reason for traveling to any foreign destination.
Orientation: The city itself, like many other Central American cities, is designed in a grid-like pattern with avenidas running north and south, and calles running from east to west. Its historic central square is logically located at Avenida 1 and Calle 1. After that, the city is divided into colonías (neighborhoods), which includes a wide array of housing for its residents and income classes that range from the desolate to the rich. My suggestions for visiting the city begins at El Centro (the historic center), travels through the Colonia Escalón, and ends at the Colonia San Benito.
El Centro


El Centro, also known as the Centro Histórico, is noisy, bustling and hectic. But it includes the following three major attractions. Try to visit the area only during the day and of course, watch your belongings. 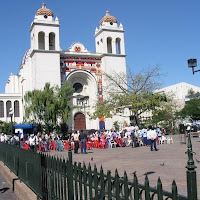 Catedral Metropolitan de San Salvador: Also known as the Metropolitan Cathedral of the Holy Savior, is the primary church of the Roman Catholic Archdiocese in the city and the seat of the Archbishop of San Salvador. This colorful church was visited not once but twice by Pope John Paul II (in 1983 and 1996) who was quoted as saying, "This church is intimately allied with the joys and hopes of the Salvadoran people." It was also where he once kneeled before the tomb of Archbishop Óscar Romero, who was assassinated in 1980 and remains one of the country’s most beloved figures. 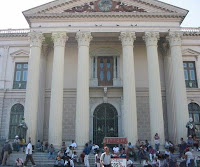 Palacio Nacional: The grand National Palace is considered by many to be one of the most majestic buildings in the country. Located across from the central square, this building was the former meeting place for the House of Representatives and it has a long history of being damaged due to both fires and earthquakes. It is used primarily to keep the country’s records and for important symbolic events. For example, Salvadoran President Mauricio Funes and U.S. President Barack Obama posed for pictures on the steps of the National Palace on his visit to San Salvador in March 2011.
Teatro Nacional de El Salvador: Also known as the National Theater of El Salvador, is one of the oldest theaters in Central America. Dating back to 1911, this building was designed by Daniel Beylard, a French architect who combined the French styles of Versailles, Rococo, and Art Nouveau into one beautiful structure. It was declared an official Salvadoran national monument in 1979 and it continues to offer a full season of theater, concerts, and other special cultural events.
Colonia Escalón

Plaza de las Américas: Located west of the historical center on the Alameda F. D. Roosevelt is the Colonia Escalón, which is both a commercial and residential neighborhood. The major reason to go this direction is to see the Plaza de las Américas. It is truly an inspiring location and a great photo opportunity due to its landscaped park and the statue known as "The Savior of the World" that features Jesus standing on top of the world. Keep in mind that there is no parking and it is somewhat difficult to cross the numerous lanes of high-speed traffic.
Colonia San Benito


This neighborhood is located southwest of the Colonia Escalón and it includes the Zona Rosa with its numerous restaurants, bars, and nightclubs. Amidst its tall apartment buildings, which are some of the tallest in the country, this is where some of the city’s best museums are located. 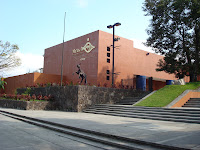 The Museo Nacional de Antropología: The National Museum of Anthropology was founded by Salvadoran scientist David Guzman. It includes a variety of exhibitions that covers much of the cultural history of El Salvador with artifacts dating back to the indigenous tribes who once lived in the region. You will see a variety of ancient tools, weapons, and pottery. The handful of galleries can be explored in a relatively little amount of time before visiting the larger Museum of Modern Art. It is open Tuesdays through Sundays from 9 a.m. to 5 p.m.

The Museum of Modern Art (MARTE): This the most important cultural center in El Salvador. I have visited many different art museums in Central America and this one certainly ranks among the best. It includes a surprising collection of 20th-century artwork that includes everything from cubist and surrealist to abstract. Most of the featured works are located in the main hall but the smaller galleries are still worth visiting. In my opinion, the works by the Salvadoran artists were the most interesting because they included vivid portrayals of the country’s strife and turmoil. The details on some of the paintings were incredible. Make sure to see the 70-foot Monumento a la Revolución (pictured at right) in the museum’s central plaza that will take your breath away.

Centro Monsignor Romero: Finally, I am always one to focus on a country’s history whether is it is beautifully joyous or horribly tragic. Located at the Universidad Centroamerica is the Centro Monsignor Romero, which includes a detailed exhibit about El Salvador’s long and tragic history. Make sure to begin in the "Hall of Martyrs" where you will learn about the life and assassination of Monsignor Romero, the Archbishop of San Salvador through pictures, news, and his personal belongings. In addition to Romero, you will also learn about how six Jesuit priests were murdered on the campus by an army battalion in the November 1989. These exhibits are a sobering reminder of what humans can do to one another. There is a beautiful little rose garden that pays tribute to these individuals. 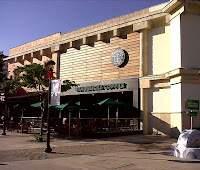 To end on a lighter note, I had a chuckle when I visited the upscale shopping center in Antiguo Cuscatlan. This bright and clean shopping center known as La Gran Via reminded me of other upscale malls in the United States and it even included a STARBUCKS!! More information about the La Gran Via shopping center can be found at their website: www.lagranvia.com.sv/.
Posted by Sir Runner James