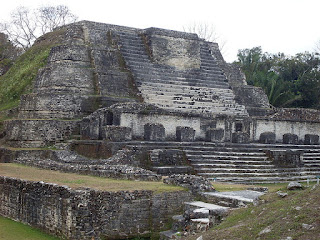 Located approximately 30 miles north of Belize City in Belize, are the ancient Mayan ruins of Altun Ha. Although many seasoned travelers state that the Caracol Mayan ruins are much more impressive, Altun Ha is equally as memorable. Best of all, getting to these ruins are much easier than other sites where visitors are escorted with armed guards for their protection. Due to this accessibility, this five-square-mile location has become a very popular excursion for passengers on the major cruise lines that stop in Belize City. A word of advice: when in Belize City, make sure to note if there are ships docked at the port and plan accordingly. Otherwise, you might just be walking the grounds with five busloads of tourists. 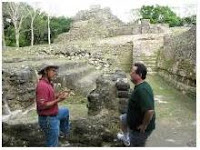 Getting to the ruins is relatively easy especially if you have access to a car. Just take the Northern Highway north from Belize City to mile marker 19 where you will turn right on the Old Northern Highway and drive approximately 10 miles to the well-marked entrance to Altun Ha on the left side of the road. This two-mile entrance road will take you directly to the visitor center. Make sure to use one of the local guides at the visitor center. They are not only affordable (around US$10 per person) and knowledgeable but it is your way of giving back to the local economy since they actually live in the area near the ruins.
Tours: If you choose to be driven instead, I recommend two reputable tour companies that are based in Belize City: The Experience Belize Tours (www.experiencebelizetours.com) and the Caribbean Shore Tours (www.caribbeanshoretours.com). Both companies provide round-trip transportation and can also arrange private excursions for family or group members as well. The Caribbean Shore Tours actually limits the numbers within each tour group to only 14 people for a more personal and enjoyable experience.

Archaeologists believe that Altun Ha was first settled around 200 BC, with the bulk of the 500 structures built during the Mayan Classic period between A.D. 200 and 900. At its peak, the area was home to more than 10,000 Mayans and it served as a major trading and religious ceremonial center. The site was not discovered by archaeologists until 1963, when a pilot and an amateur Mayan enthusiast flew over the area and noticed the ancient remains hidden within the jungle. The site consists of two central plazas: Plaza A and Plaza B.
Plaza A - Located near the entrance to the site, this plaza is enclosed on each of its four sides by eight large temples. But unlike most Mayan centers, there are no carved monuments, or stelae in front of these structures. The reason for their absence is unclear, but it may be that the stela art did not extend to regions on the fringes of the Mayan area. Seven different funeral chambers were eventually discovered in this area including one special tomb beneath one of the temples. Known as The Temple of the Green Tomb, this special tomb dates back to A.D. 550  and it included more than 300 special artifacts such as jade, jewelry, pearls, skins, shells and even the remains of a Mayan book. Scholars believe that this tomb included the body of someone of great importance.

Plaza B - Located adjacent to Plaza A, it includes the largest temple on the site, which is the 54-foot The Temple of Masonry Altar (seen in the photo at the top of this post). After several important discoveries of artifacts within the temple, most scholars believe that it once served as the primary site for the city’s religious activities. A single stairway leads to the top of the temple where an altar sits at its peak. It brings to mind a scene where a sacrifice is made to the Gods and you can imagine the amount of fear, intimidation and celebration that occurred during those ceremonies. This pyramid is also used as the symbol for the country's most famous beer: Belikin.

Rockstone Pond - Located just outside of the two plazas, a short trail leads directly to Rockstone Pond, which is also known as the Reservoir. According to my guide, this work of ingenuity began as a large hole that was eventually lined with limestone cement. After the water was diverted from a nearby stream, it served as the primary source of fresh water for the city. Although archaeologists debate whether the reservoir was built either before the temples or after, one thing is for sure: this reservoir is an example of how brilliant engineering skills were used well before modern technology. But like many of its Mayan counterparts, the city fell into decline and was consumed by the surrounding jungle beginning in A.D. 1000.

The Jade Head - In addition to the archaeological discoveries that included the bodies of several Altun Ha high priests, a major piece was discovered an extensive excavation between 1965 and 1970. Led by Dr. David Pendergast of the Royal Ontario Museum, a 10-pound, 15-centimeter high, jade head was discovered. Depicting the Mayan Sun God, Kinich Ahau, it is the largest jade item in the world and it is considered one of the country’s national treasures.

The jade head has become so important that its image is actually printed on the country’s 10-dollar bill (seen in the top-left corner). Unfortunately, for visitors of Altun Ha, the actual jade head is kept under the watchful eyes of security within a solid-steel vault in the Central Bank of Belize.