Exploring the City of Tegucigalpa in Honduras

Tegucigalpa, the largest city in Honduras, also serves as the country's capital. Located at an elevation of approximately 3,250 feet, the bustling city of more than a million people is not usually the most inviting city due to its first impression. At first glance, you will see narrow, winding streets congested with traffic and sidewalks filled with crowds. But it still has an overall Spanish colonial layout with historic structures, a cool climate, and other special attractions that makes it the perfect starting point before exploring the rest of the country.
Founded by Spanish explorers in 1578, it rapidly expanded due to the silver and gold produced by the mines located just to the east. As the city's population spread down from the mountains and across the Río Choluteca into its sister city, Comayagüela, it also became a strong political center for Honduras. From the mid-1800s, the capital of the country switched between Comayagua (51 miles northwest) and Tegucigalpa several times until "Tegu" (as it is affectionately called) was officially chosen as the political center in 1880.
﻿﻿﻿﻿﻿

What to See in Tegucigalpa 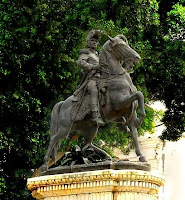 Plaza Morazán: Located at the Calle Bolívar and the Avenida Miguel de Cervantes, this tree-lined Parque Central is the heart of the Tegucigalpa’s old city. It is generally crowded during the day with residents sitting and chatting with friends, and street vendors selling every type of souvenir or service imaginable. But it is a great area for visitors to begin exploring the city. Its notable attraction is the statue of Francisco Morazán, who was a soldier and liberal reformer elected president of the Central American Republic in 1830.


Catedral San Miguel: Also known as the Catedral del Arcángel San Miguel (Tegucigalpa's patron saint), this beautiful cathedral is located on the eastern edge of the plaza. Built from 1765 to 1782, it is one of the best preserved cathedrals in the country.  It consists of a large domed structure with two bell towers complete with a spectacular altar created by the well-known Guatemalan artist Vicente Galvéz . In addition, the baptismal font was created in 1643 from a single block of stone. The cathedral should be seen by any visitor to the city.
Iglesia Los Dolores: This beautiful white church is located approximately two blocks northwest of the Plaza Morazán. Completed in 1732, it includes a Baroque facade decorated with a representation of the last days of Christ complete with the crowing cock that signaled when he was betrayed. Inside, there is an elaborate golden altar, a beautiful dome, and paintings of the crucifixion. The church is dedicated to human sorrow, and it is revered by many less-fortunate Hondurans. 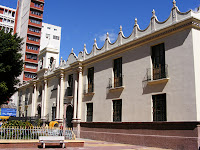 Galería Nacional de Arte: Founded in 1996, the National Gallery of Art is located in a former convent just south of the Plaza Morazán. It includes a large collection of Central American art that ranges from pre-Columbian ceramics and decorative Mayan sculptures to the latest religious art and paintings by well-known 20th-century artists. One of the highlights includes the works of Pablo Zelaya Sierra, who is one the country’s best contemporary artists. The gallery is open seven-days-a-week from 9 a.m. to 4 p.m. with limited hours on Sundays from 9 a.m. to 1 p.m.

Museo Nacional de Historica de la República: The National Museum of History is located in a former presidential mansion (the Villa Roy) on a steep hillside two blocks northwest of the Iglesia Los Dolores. It includes historical exhibits about the country’s politics and the struggle for independence as well as its aftermath. An interesting exhibit is located right in the parking lot, where you can see five of the presidential limousines from former administrations, each more luxurious than the other. The museum is open Mondays through Saturdays from 8 a.m. to 4 p.m.


Cerro El Picacho: This "hill" is one of the most well-known attractions in the city. Located north of the Plaza Morazán, it includes a park of the same name that overlooks the city. The main attraction is the Cristo del Picacho, a large open-armed statue of Jesus Christ that can be seen from many points throughout Tegucigalpa. At night, the statue is illuminated in colored lights, which looks incredible. You can get there in 20 minutes by taking the El Hatillo bus from the corner of Calle Finlay and Calle Cristobal or hiring a taxi for a fare of approximately L$120. 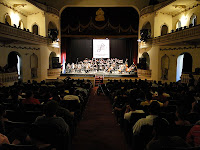 Teatro Nacional Manuel Bonilla: Named after a president who led the country between 1903 and 1915, this theater was completed in 1915 after 10 years of construction. The exterior is built with pink stone in a Renaissance style with an impressive interior that was based on the Athenée in Paris. Its main hall includes a decorated tin ceiling with five beautiful chandeliers, decorative lamps, and Venetian glass accents. It offers a wide variety of performances that range from theatrical plays to classical performances and rock concerts. It is located at Avenida Paz Barahona and Calle La Concordia in the Barrio El Centro.
Museo para la Identidad Nacional: Located on the Calle Peatonal, the National Identity Museum ncludes an impressive exhibition that focuses on the overall history of Honduras. It begins with the geographical beginning of Central America followed by a chronological survey through the Mayan and Spanish colonial eras. It culminates with an exhibit about influential presidents who greatly affected the country as a whole. One of the museum’s highlights includes a reproduction of a Mayan civilization during its peak of domination. The museum is open Tuesdays through Saturdays from 9 a.m. to 5 p.m. and Sundays from 10 a.m. to 4 p.m.