Exploring the Lamanai Ruins in Belize 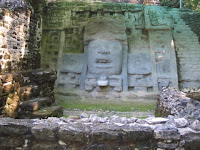 ﻿Located approximately 24 miles south of Orange Walk Town in northern Belize, is the longest occupied Mayan site in the country. Known as Lamanai, which is Mayan for "submerged crocodile," it was inhabited for an impressive amount of time from 1500 B.C. to as late as A.D. 1700. In addition, what makes the site so interesting is its location on the western bank of a spectacular 28-mile long lagoon, one of just two waterside Mayan ruins in the country. ﻿﻿
Lamanai served as a prominent Mayan center from approximately the 4th century B.C. to the 1st century A.D., but the city thrived even after the Spanish arrived on the Yucatán Peninsula. In fact, Spanish missionaries actually established two Roman Catholic churches near the site. But after a Mayan revolt drove them out, the churches were burned to the ground. Although the first detailed description of Lamanai was made in 1917 by Thomas Gann (an amateur archaeologist known for his exploration of Mayan Ruins), extensive excavation of the site began in 1974 by David Pendergast of the Royal Ontario Museum, which continued until 1988. Since 2006, most of the site’s research was re-directed toward artifact analysis.


Today, the ruins are situated within a 950-acre archaeological reserve and it consists of more than 700 structures that includes one of the largest Mayan temples in the country. Since funding for excavations were spread throughout the site, many of the structures have only been superficially excavated. So what you will see are temples overgrown with trees, vines, and vegetation. But this rough appearance is what makes the site special. You can actually imagine discovering the site yourself long ago as you first emerge from the surrounding tropical forest. You have a choice of exploring the site on your own or taking a guided tour offered by the Lamanai Outpost Lodge and other nearby hotels.


Getting to the Lamanai Ruins
To get to the site independently, you can travel by car or by boat. By car, you can drive on the mostly unpaved road from Orange Walk Town. Just drive west from the Orange Walk fire station and head southwest for 24 miles until you reach the village of San Felipe. In San Felipe, follow the road to Chan Chich for another 11 miles until you reach Lamanai. 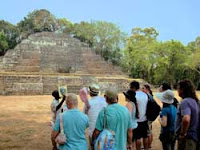 The most interesting and practical way to reach Lamanai is by taking an organized boat tour. The trip takes a little less than an hour and the boats depart from the Tower Hill Bridge on the New River, which is approximately six miles south of Orange Walk Town. For those looking for an excursion from the cruise-ship port in Belize City, Belize Cruise Excursions offers roundtrip transportation to Orange Walk Town as well as the boat trip, guide, and ample time to explore the site. Tours can be arranged by going to their website at  www.belizecruiseexcursions.com
What to See at Lamanai

Visitor Center and Museum: Before exploring the site, make sure to stop by this informative museum to learn more about Lamanai. It includes educational displays that cover the site's history and daily life of its residents as well as pottery and statues that date back more than 2,500 years. With some of the shelves cluttered by fragments of pottery and statues, it gives you perspective about how this site once thrived with more than 35,000 residents.
High Temple: The best structure at the site, it is formally known as Structure N10-43. Seen in the second photo from the top of this post, this 108-foot high temple is the largest from the period in the entire Mayan region. It can be climbed (as long as there is a certified guide nearby), and the view from the top is spectacular. You will see a large portion of the New River lagoon as well as the surrounding tropical forest. 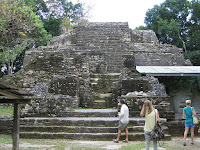 Mask Temple: Located north of the High Temple, this temple (formally known as Structure N9-56) is often called the Mask Temple for its spectacular and well-preserved stucco mask representing the Sun God, Kinich Ahau. Facing the front of the temple, the 13-foot mask is located on right side and you can just imagine this amazing feature either causing fear or praise for anyone who stepped in front of it. The temple is the smallest of the three excavated temples at the site and it was first built in A.D. 100 with the final phase of construction occurring between A.D. 550 to 650. In the spring of 2011, an identical mask was uncovered on the left side, which marks the tradition of symmetry in Mayan design.


Temple of the Jaguar Masks: Located at the southern end of the site, this 65-foot temple (formally known as Structure N10-9), was originally built in the 6th century A.D. It is also known as the Jaguar Temple for its two large jaguar heads located at its lower level. A good portion of this nine-tiered temple remains covered by jungle growth and a significant amount of the temple is still underground. As stated by my guide, "If fully excavated, it would be much taller than the High Temple." 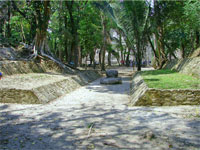 Ball Court: Located just south of the High Temple, is the ball court. It is such a simple name for an area that usually meant death for the losing team. On the other hand, the winners were treated as heroes and usually given an elaborate feast. These "games" were directly connected to the Mayan belief that human sacrifice was an important factor in the civilization’s future success. These ball courts can be seen in just about every Mayan ruin throughout Central America.