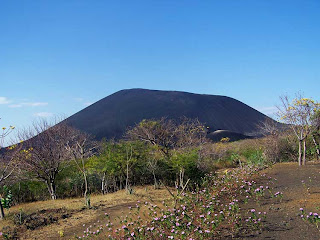 The Volcán Cerro Negro, also known as the Cerro Negro Volcano, is located in northwestern Nicaragua about 15 miles northeast of León. It is an active 2,388-foot, cinder-cone volcano situated in the Maribios volcanic chain that runs northwest to southeast through Nicaragua. Formed in 1850, it is one of the youngest volcanoes in Central America and its name meaning "Black Hill" could not be more appropriate. The constant volcanic activity has covered its slopes with black volcanic sand, which makes it nearly impossible for vegetation to grow there. It looms on the horizon in stark contrast to its surroundings.

According to the Global Volcanism Program at the Smithsonian Institute, "The Cerro Negro Volcano is the largest, southernmost, and most recent of a group of four young cinder cone volcanoes in the Maribios chain." It has remained extremely active since it first formed in 1850 and to date, it has erupted more than 24 times. The latest eruption occurred in August 1999 when 60 homes were damaged by lava flows. Although it has been relatively quiet since the 1999 eruption, this young volcano still shows some seismic activity with vents gas and plumes of smoke. But don’t worry, it is being closely monitored.


Getting to the Volcano
If you choose to get to the volcano independently, just head east from León on the highway that leads to Chinandega. After approximately two miles, head toward the town of Lechecuago. From the center of town, follow all signs marked "Cerro Negro." The roads become unpaved and pretty rough, so make sure to drive a SUV or similar high-clearance vehicle. The difficulty of getting there independently is the primary reason why I recommend taking one of the affordable tour groups from León. The volcano itself is within a protected area and the admission fee is approximately US$3 for foreigners and C$20 for Nicaraguan residents.

The Cerro Negro is a manageable climb that includes a primary trail that is initially graduated and travels through a series of volcanic rocks. The greatest effort is mostly at the end when the path becomes very steep and the intense heat from the sun and venting gases makes it sometimes unbearable. In other words, prepare to sweat! But the 60-minute trek to the summit rewards you with amazing 360-degree views of the Maribios volcanic mountain chain, the city of León, and as far as the Pacific Ocean. This is unusual because many other volcanoes in the country are usually shrouded by cloud cover. 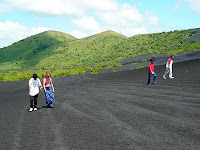 ﻿﻿It cannot be stressed enough that the heat from the volcano and the intense sun can be the most daunting aspect about climbing the Cerro Negro. The black ash seems to soak in all of the sun’s heat and it can feel like walking on a frying pan. So be sure to bring enough water and sunscreen and travel as early as possible before the volcano heats up. Also wear a good pair of hiking shoes or boots and a light but sturdy pair of pants. Both of these will protect you from the sharp volcanic rocks and the abrasive sand on your descent. ﻿﻿﻿﻿﻿
The most popular way to descend the volcano is by either sandboarding or running (the more dangerous version) down the steep western slope. Since the side is generally too difficult to climb due to the thick volcanic sand, it is used instead as an exhilarating descent where people "ski" down using everything from actual snowboards and flattened cardboard boxes to just the shoes on your feet. It has since become one of the top activities in the region. 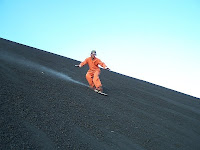 Unless you come independently with your own snowboard and equipment, the best way to experience Cerro Negro is by booking any one of these reputable tour companies, which are all based in nearby León. They each offer round-trip transportation, informative guides, boards, all safety equipment, and instruction.

Servi Tours –  (www.servitourstravel.com) It offers a one-day, Sandboarding at Cerro Negro tour that includes a full day at Cerro Negro, round-trip transportation, bilingual guide, the entrance fee, and sand-boarding equipment. The tours depart from both León and Managua early in the morning.
Tierra Tours – (www.tierratour.com) It provides a five-hour Volcano Boarding Cerro Negro tour that includes entrance fees, round-trip transportation, boards and equipment, snacks and a bilingual guide. It departs twice a day at 8 a.m. and 1:30 p.m.


Bigfoot Nicaragua - (www.bigfootnicaragua.com) This company received a lot of press especially after the popular television show Survivor Nicaragua. It offers a 4.5-hour Volcano Boarding tour seven-days-a-week complete with bilingual guide, all boarding and safety equipment, snacks, free t-shirt, stickers, and even beer! They even offer a variety of tours that combines volcano boarding with activities such as Spanish immersion and surfing.
Julio Tours Nicaragua – (www.juliotoursnicaragua.com.ni) Based in León, it offers a five-hour Cerro Negro Hiking and Sandboarding tour that includes round-trip transportation (with air-conditioning!), volcano board, safety glasses, entrance fees and a guide.
Quetzaltrekkers – (www.quetzaltrekkers.com) Based in León, it offers a Cerro Negro Volcano Surfing tour that departs daily at 8 a.m. It includes round-trip transportation, food, purified water, one guide, entrance fees, protective jumpsuit and board. It even offers a second descent! Best of all, Quetzaltrekkers is a non-profit volunteer organization that provides the hike in order to raise money for street children and at-risk kids. 100 percent of the profits go to Asociación Las Tias, which already has more than 15 years of experience taking care of street children in León.